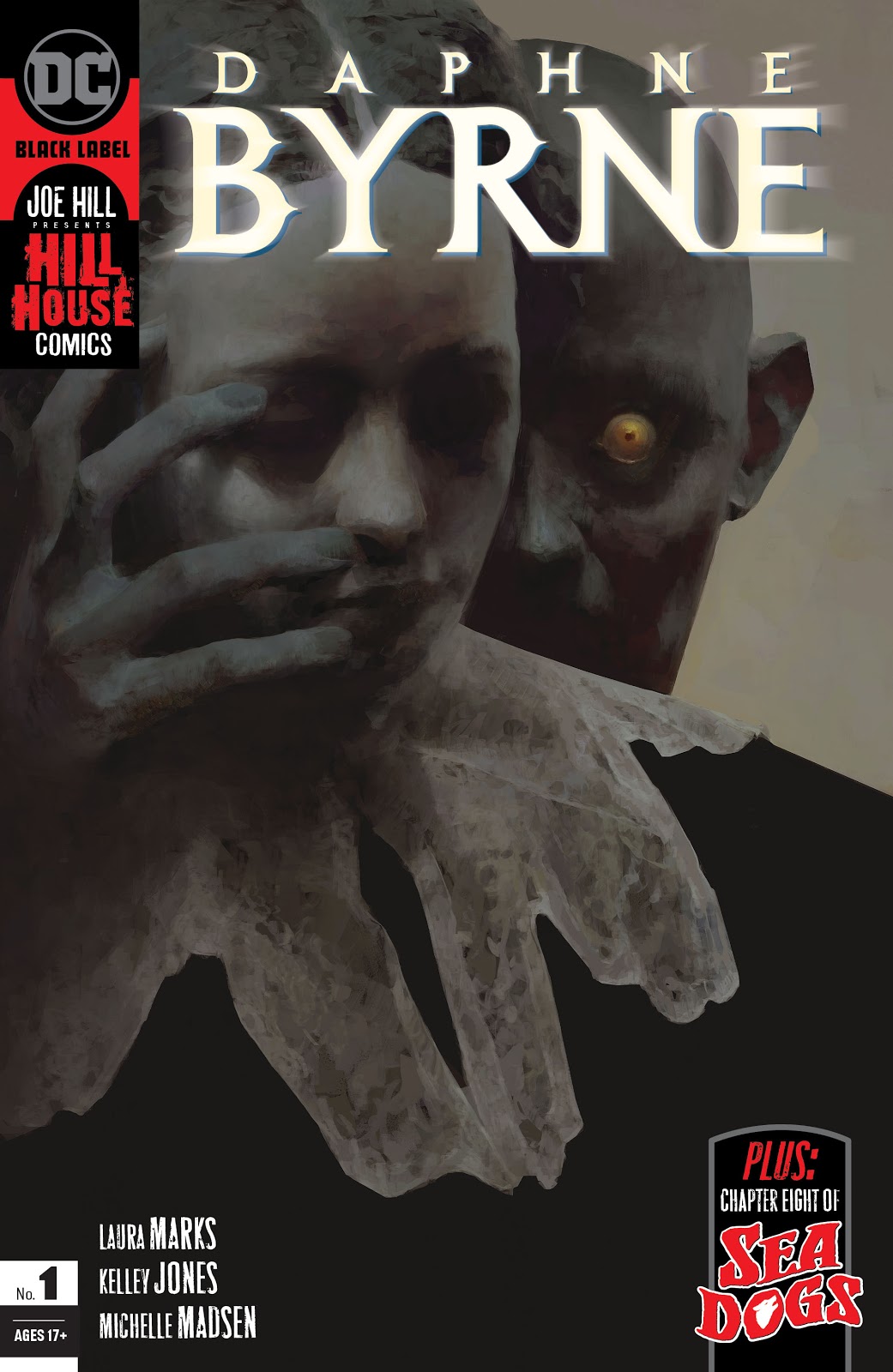 DC is still coming out with shit. This is some of that shit.

Right now this comic is 4 issues deep and was created by Laura Marks, Kelley Jones, and Michelle Madsen.

Here’s what the description kinda said : 19th century New York City. A young girl is sad because her dad died and her mom went batshit. BUT IF THAT WEREN’T ENOUGH SHE ALSO IS BEING HAUNTED BY A PRESENCE WITHIN HER!

I mean, that’s a great logline if I’ve ever seen one. Which I haven’t.

OH! I wanted to mention that I almost did a recap for the new Batman that came out last month, but it was SOOOO boring that I just could not. But don’t take my word for it, it took me 5 minutes to figure out how to put my sweatshirt on today.

SO ANYWAYS, DAPHNE BYRNE. THAT’S THE GIRLS NAME! WHY ARE WE SHOUTING!?

The comic starts showing Daphne’s mummy at a psychic, then it shows the streets and this terrifying hobo begging for change, this is called FORESHADOWING, ok?

After all of that foreshadowing we get to where Daphne is, she’s at school! Because she’s a child! A child of a rich person, but apparently the family is going broke because her dad died, and her schoolmates decide that, instead of helping their schoolmate who is going through a rough time and isn’t on her feet yet, they’re going to just talk crazy shit about her in attempt to get her to cry!

Girl: I heard they’re going to lose the carriage!

Daphne: I’m just going to sit here and pretend to color because otherwise I’m going to cry, because I am a child and I’m being bullied for things that are out of my control. Ta-ta-ta-tum-tum. Avoidance is the best method for healing!

Now her schoolmates are headed to the park and she is sitting on the ground playing with a rock and one of the girls is like “wtf is that” and daphne is like “It’s Basalt, a type of rock. I like it because I have witch tendancies, plus I wear all black, I’m really leaning into this whole dead dad thing. In fact, I’m going to the cemetary. See ya.”

At the cemetary, she speaks to a plot of land that her father was buried in, and hugs a piece of stone with his name etched on it.

After her creepy good time with her dad she heads home. The maid and her mom are excited to see her and her mom invites her to see the psychic with her tomorrow! YEAH MORE SPOOKY GOOD TIMES!

THE NEXT DAY THEY’RE OFF TO SEE THE MEDIUM PSYCHIC LADY!

On the way, Daphne’s mummy sees a homeless man begging for change, so she hands some change to Daphne and tells her young daughter to walk over to the homeless man and give him the change.

Do it yourself, bitch.

That’s what I woulda said, but what Daphne said was funnier.

The hesitation was dignified, because when Daphne hands over her mother’s change to the zombie in the corner, he grabs her wrist and then all these worms start coming out of his wrists, then he pulls her towards his face where she can see multiple pustules. And we can’t smell him through a page, but I’m sure he did not smell great.

I don’t think anyone smelled good in the 19th century, TBH.

He says some creepy shit like, “you’ll do nicely, he’ll be pleased.” And the girl just rips her hand from his grasp and her mom is like, “Stop messing around, Daphne, we got shit to do.”

They go do their shit, which is talking to a fake Medium and we find out she’s a fake because Daphne is like, daddy do you remember looking at the stars? And the medium is like I sure do, Daph. Then when she leaves she reveals to her mother that the woman is a fake and they never looked at the stars and her mom is pissed because let’s be real the ghost talking is all that she has. She’s grieving and needs something to believe in and Daphne went and took a shit all over her hopes and happiness. THIS WAS HER SLIVER OF HAPPINESS IN LIFE AND YOU TAINTED IT YOU BITCH.

So they have dinner, it’s pig’s feet and Daphne won’t eat it. blah blah blah now it’s nighttime, Daphne is having a nightmare where she meets a man in nightmareland who says he is her brother, but they look nothing alike, so idk what to believe! I definitely believe in illegitimate children though. Especially in the 1800s. Like half of these bitches illegitimate I’m sure. So lyke,

Half-brother, more like. ANYWAYS! there’s more zombies there like the guy she gave the change to, and half-brother is all “I’m going to take you to your dad, but first you have to chop up a pig!”

And Daphne is like “I wouldn’t even have the feet for dinner, why would I do that?”

Half-brother : Because you get to see your dad, idiot, also we love murder! Murder is fun once you get used to doing it!

Daphne: Yeah, okay. Give me a knife.

Daphne slices up the baby piggy and wakes up all bloody in her bedroom.

Well, that was anti-climactic. Gonna keep on reading those next few issues though! Have you read this issue yet? Are you thinking about it? Are you confused about my sweatshirt incident? Let me know all of your thoughts in the comment section!!!

Do you want to be best friends?

Now, shut up. I love that shirt on you.

Latest Episode of Relatable With Ilsa and Kyra